Skolio summit is the third highest of Mt Olympus. Southwest of the peak lies Stefani (2.912m) and to the west Skala (2.882m). The easiest access is from both the east and the south side. There is a climbing approach from the north side, through Kazannia, and from the west via the ridge of Skolio.

Those that first stepped on the peak tried to give various interpretations of its name, with most believing it is attributed to the ruins of a building made of red bricks, but there has not been a definitive explanation of the name. Regarding the remains of the building, the English Diplomat David Urquhart mentions in 1830 that he found the ruins of a brick construction and an inscription that read something, but provides no further details. About 30 years later, Heinrich Barth gives us his own interpretation based on the same data. Barth assumes the building was either a Fryktoria*, or an altar or simply a watchtower. Marcel Kurz in his book "Le Mont Olympe", mentions that perhaps the ruins are less of a mythical and ancient origin noting that "...it is not unlikely that robbers, in order to avoid persecution from their enemies made some constructions higher than we assume. But why would they use bricks and not stones? There is therefore a problem for archaeology which would be worth clarifying...".

According to tradition, during the summer ascetics in the area gave lessons to the children of shepherds, who came with their flocks to the high areas of Olympus. So perhaps the name comes from the ancient word "σχολή" (school), and the later version "σχολείο" (scholio) – "σκολιό" (skolio). Another version is that the name of the peak comes from the ancient word "σκολιόν" (skolion) = distorted.


*Fryktoria was a system of optical transmission of messages in ancient Greece. Transmission was done one letter at a time between hills that were several kilometers apart, with a combined torch system, devised by Kleoxenos and Dimokleitos in the 3rd century BC. 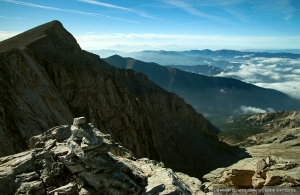